A sobering article the New York Times recently published (HERE) and has been spreading through our office and my networks like fire; “The Graying of America’s Homeless” focuses on the increasing age of homeless folks around the country, and more specifically in rapidly gentrifying cities such as San Francisco, Los Angeles, and New York.

Sadly, this is not new news. If you work in the field of aging, chances are you’ve heard about this before. In fact, a decade ago researchers were already noticing an increase in the proportion of older homeless in San Francisco. In 1990, older persons were about 10% of the city’s homeless population; in the 2015 Homeless Count, more than 30% of homeless were 50 years or older[1].

When we think about creating and ensuring age-friendly cities, homeless (and the risk of homelessness) needs to play a part. Here’s a great example – one of the individuals interviewed said, “My biggest challenge out here? Access to a bathroom.”

I know in SF, the public bathrooms in the main library were being used so much (for so many things), that the library actually hired a social worker to better serve the homeless population. (read more about that HERE or listen HERE) What a thoughtful and proactive approach, kudos for the SFPL for being compassionate around this challenge rather than punitive. 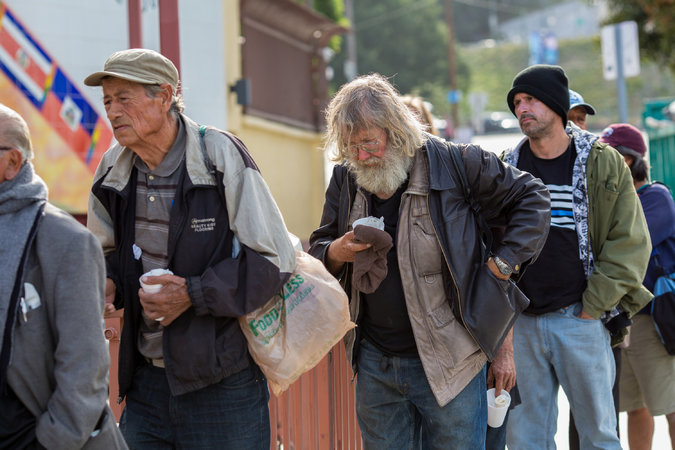 When focusing on this specific group of elders, it’s also important to note that homelessness hastens aging and that “the trauma of life on the street can make a homeless person biologically old well beyond his or her years.” Additionally, “many homeless people in their 50s…have physical and cognitive disabilities more commonly seen in people in their 70’s and 80’s.”[2] When we talk about the age-friendly city, we have to cast a wider net in thinking about the types of folks most impacted.

The City of San Francisco’s Department of Aging and Adult Services* recently released their comprehensive needs assessment, which offered a SF focused perspective on these issues. With this topic in mind, some takeaways included (all from the report):

Additionally, the report notes that Oakland is working on a longitudinal study that has found that 43% of homeless seniors did not losing housing until their 50’s. Additinoally, in New York, a study found that more than half of the older homeless population led “conventional lives” prior to becoming homeless.[3]

My one bone to pick with the article was this statement: “This is a fluid population, defying precise count or categorization. Some might enjoy a stretch of stability, holding down a job for a while or finding a spare bed with a friend. But more than anything, these are men or women who, as they enter old age, have settled into patterns they seem unwilling, or unable, to break. “

Ugghh. So pretentious, simplistic, and victim blaming. We so often blame tragic economic situations on the individuals, even knowing that currently in SF a 1 bedroom is going for about $3,400/month and that reports show SFers would need an income of $216,219/yr (HERE) So, let’s say a senior living on SSI (which typically maxs out at around $733/month) is suddenly evicted – what do they do? They sure as hell can’t find another apartment within that price range. If they can’t move in with family, institutional housing starts at $3,000/month (and in SF, that is basically a cockroach infested dump**) and ranges upwards of $5-10,000/month. Not to mention medications, transportation, etc. Honestly, I’m surprised there aren’t more homeless of all ages, in SF anyway, than we’re seeing. I don’t want to end on a sad note and please don’t confuse my passion with fatalism – there is actually a lot we can do around this issue and there are great orgs that are doing their best to work on this issue.

WANT TO GET INVOLVED? Here’s a few ideas…

Curry Senior Center is amazing, a fantastic organization that support homeless seniors  – check them out HERE.

In Oakland, a quick Google search brought up St. Mary’s Center – I don’t know them personally, but they could be a great start if you’re in Oaktown, check them out HERE.

In Los Angeles, a buddy and grad school classmate runs a great organization called Would Works – they’re a social enterprise for folks living in poverty, check them out HERE.

Know of other great orgs, programs or research that is focused on this topic? Please let me know!

JUNE 2016 UPDATE: local bay area journalists are focusing on homelessness as a part of the SF Homeless Project, including Mother Jones HERE and the SF Chronicle’s heartbreaking article HERE.

“We never replaced the affordable-housing support that was destroyed in the 1980’s, so if you want to solve homelessness, you need to not have so much poverty…What we’ve got is a problem of homelessness created because we haven’t done what we should have in the first place, so now we have to handle it in the second place – with techniques like supportive housing.” AMEN. (SF Chronicle)

*Full Disclosure: I’m employed by this agency but had no input or role with the Needs Assessment.

** as an Ombudsman, I can say that I’ve actually seen this.

Ensuring cities are built for everyone